PCR stands for Polymerase Chain Reaction, which is a laboratory technique used to make multiple copies of a segment of DNA. It is simple, rapid, and accurate. It is an inexpensive tool used to copy or amplify, a specific DNA target from a mixture of DNA molecules. In 1983, this technique was developed by Kary B. Mullis. In 1993, Mullis along with biochemist Michael Smith were jointly awarded the Nobel Prize in Chemistry (in appreciation of their contribution to science). This technique has a large range of applications like gene cloning, sequencing, forensic sciences, and diagnosis of different types of diseases in biological research.

In 1983, Mullis was working as a chemist for one of the biotechnology companies, Cetus Corporation. He had an idea that using DNA polymerase a pair of primers can be used to copy the DNA sequence. On December 16, 1983, Mullis completed demonstrating Polymerase Chain Reaction. Other scientists, Randall Saiki and Henry Erlich of the same Corporation also worked on the PCR project. They tried to test whether PCR could amplify a specific human gene (Betaglobin) from genomic DNA. They published their first paper on the utilization of the technique.

Consequently, Mullis was still working on a paper that would describe PCR itself. The polymerase he used for the amplification was broken or destroyed at high temperatures. In 1986, Saiki started to use Taq Polymerase (Thermophilus aquaticus) DNA polymerase to amplify segments of DNA. It acts heat resistant so only needs to add once. Thus, making this technique more affordable and subjected to automation. This technique created a revolution in genetics, molecular biology, biochemistry, medicines, and forensics.

The basic principle of the PCR techniques is the enzymatic replication of DNA. With this technique, short a segment of DNA is amplified using primer-mediated enzymes. Then, DNA Polymerase synthesized new strands of DNA complementary to the template DNA. After that DNA polymerase adds a nucleotide to the pre-existing 3’-OH group only. Thus, DNA replication always starts with the primer. More nucleotides are joined to the 3’ prime end of the DNA polymerase. Most PCR techniques amplify DNA fragments of between 0.1 and 10 Kilobase pairs (kbp) in length. Some techniques allow for the amplification of fragments up to 40 kbp.

For a basic PCR set-up, several components and reagents are required like DNA templates, primers, DNA polymerases, nucleotides, and buffers.

The DNA template is the DNA of interest from the sample. To amplifies the target DNA sequence, whole genomic DNA or plasmid DNA can be used as a template for carrying out PCR. It contains the DNA target region to amplify.

dNTPs provide energy for polymerization. These are the building blocks for the synthesis of DNA. It is a single unit of bases. It joined the nucleotide bases floating in the reaction mixture for synthesis.

Buffer is a suitable medium for any enzymatic reaction in which the enzymes can function. It provides optimal pH and optimum concentration to stabilize the reaction.

All the thermostable DNA polymerases for their activity need free divalent cations. Moreover, for the optimum temperature, Mg++ ions are usually used.

A thermal cycler is a machine that is carried out in a PCR. It is a process of heating and cooling that creates the conditions necessary for DNA replication. It works on the principle of the Peltier effect.

All the above three steps are repeated in 30-40 cycles to amplify the target DNA in large quantities.

In the first step, when the reaction mixture is heated to 94–95℃ for about 0.5 to 2 minutes then Denaturation occurs. It breaks the hydrogen bonds between the two strands of DNA. Thus, converts it into single-stranded DNA.

For the production of new strands of DNA, the single-stranded DNA act as a template. To ensure the separation of the two strands temperature should be provided for a longer duration.

In the second step, nearly 50-65℃ temperature is provided for 35-40 seconds. Then, the primers can anneal to the single-stranded DNA. Here, the primers joined to their complementary sequences on the template DNA.

Primers are single-strand sequences of DNA or RNA around 20-30 bases in length. It serves as the starting point for the synthesis of DNA.

In the third step, 72℃ temperature is provided for 7-9 minutes. The bases are joined to the 3’ end of the primer by the Taq polymerase enzyme. It elongates the DNA in the 5’ to 3’ direction. At optimum conditions, DNA polymerase adds about 1000bp/minute.

These are the different types of PCR-

With the help of a fluorescent reporter, the DNA amplification is detected in real-time. The signal strength of the fluorescent is directly proportional to the number of amplified DNA molecules.

It reduces the non-specific binding of products due to the amplification of unexpected primer binding sites. 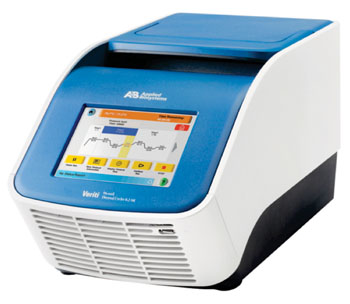 It is used for the amplification of multiple targets in a single PCR experiment. It produces many copies of different DNA sequences.

This is used as the DNA amplification linearity to detect, characterize and quantify a known sequence in a sample.

This is used as DNA fingerprinting technique based on PCR. It is used as a primer the DNA sequence of which is chosen arbitrarily.

To sum it up, the discovery of the polymerase chain reaction brought huge benefits and scientific developments such as gene expressions, and forensic science and is also used for the diagnosis of infectious diseases. Currently, the appliances required to undertake PCR are bulky and expensive, but some new miniature devices are being developed to allow the benefits of PCR to be taken out of the laboratory.