Ribosomes: The Protein Factory Of The Cell

A ribosome is an intercellular structure made of both RNA and protein. It is the cellular machinery responsible for protein synthesis. Ribosomes are also called “protein factories” of the cell. The ribosomes and the other associated molecules are also known as the translational apparatus. There are lots of ribosomes in each cell and each is made up of two subunits. These two subunits lock over the messenger RNA and then travel along the length of the messenger RNA molecule reading each three-letter codon. Each three-letter codon on the messenger RNA is combined with the matching anticodon on a specific transfer RNA. That specific RNA allows for the extension of a specific amino acid on the end of the growing protein chain.
The ribosome then breaks up after the integration of the protein. It interprets the messenger RNA or mRNA sequence. Later, translates that genetic code into a specified string of amino acids. These amino acids grow into long chains that fold to form proteins. The ribosome is presented as a docking station for the transfer of RNA that matches the sequence of bases on the messenger RNA.

In the mid-1950s, Ribosomes were first observed by Romanian- American cell biologist George Emil Palade. By using an electron microscope, they found ribosomes are granules or dense particles. They were initially called Palade granules due to their granular structure. At the end of 1958, the term “ribosome” was proposed by scientist Haguenau.

The ribosome is a complicated cellular machine. It is mostly made up of specialized RNA known as ribosomal RNA (rRNA). Also with the dozens of distinct proteins (the exact number varies slightly between species). The ribosomal proteins and rRNAs are arranged into two specific ribosomal pieces of different sizes. These are generally known as the large and small subunits of the ribosome. Ribosomes mainly consist of two subunits that fit together. These subunits work as one to translate the mRNA into a polypeptide chain during protein synthesis. Because they are formed from two subunits of unequal size and also they are lightly longer in the axis than in diameter. 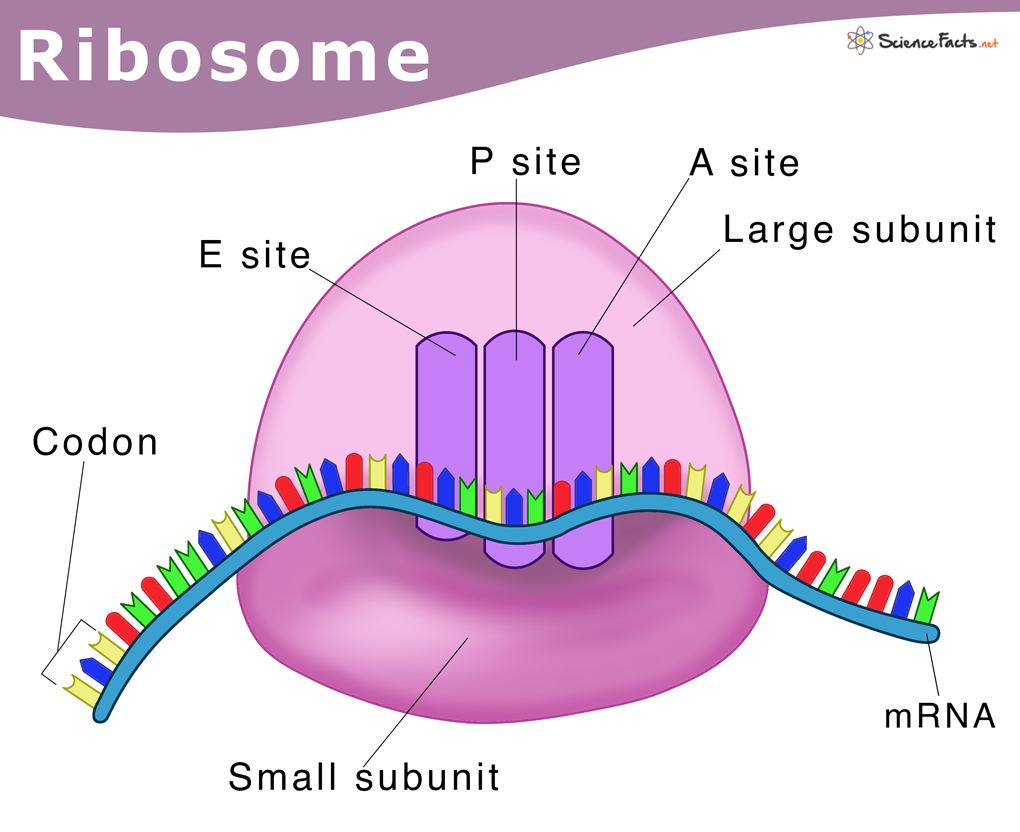 A Svedberg unit or svedberg (symbol S or Sv) is a non-SI metric unit for sedimentation coefficients. It is a measurement of a particle’s size indirectly based on its sedimentation rate under acceleration that is how fast a particle of a given size and shape settles to the bottom of a solution. The svedberg is a measurement of time. It is defined as exactly 10−13 seconds(100 fs). It is a nonlinear function. A particle’s mass, density, and shape will regulate its S value. The S value depends on the frictional forces that decrease its movement which in turn, are linked to the average cross-sectional area of the particle. In the centrifugation of small biochemical species, a convention has developed in which sedimentation coefficients are expressed in the Svedberg units. The svedberg is the most important measure used to differentiate ribosomes.

Prokaryotes have 70S ribosomes and each consisting of a small (30S) and a large (50S) subunit. Prokaryotic ribosomes are about 20 nm (200 Å) in diameter. These are composed of 65% of rRNA and 35% of ribosomal proteins. For example, E. coli has a 16S RNA subunit (consisting of 1540 nucleotides) that is bound to 21 proteins. The larger subunit is composed of a 5S RNA subunit (120 nucleotides), a 23S RNA subunit (2900 nucleotides), and 31 proteins. The forming of the 70S initiation complex is the rate-limiting step in protein synthesis. These subunits can be further divided into their constituent proteins and RNAs.

The peptidyl transferase is an aminoacyl transferase as well as the essential enzymatic function of the ribosome. It forms peptide bonds between neighbouring amino acids using tRNAs during the translation process of protein biosynthesis. The substrates for the peptidyl transferase reaction are two tRNA molecules. One bearing the developing peptide chain and the other one bearing the amino acid that will be joined to the chain. It is an enzyme that catalyzes the addition of an amino acid residue to increase the polypeptide chain in protein synthesis. It is situated in the larger ribosomal subunit, where it catalyzes the peptide bond formation.

Peptidyl transferase stimulates the reaction by lowering its energy of activation by providing the proper direction for the reaction to occur. The peptidyl transferase provides proximity, which means it brings things closer together, but it does not provide an alternate mechanism. Instead, it provides proper substrate orientation, increasing the possibility that the existing mechanism will occur.

To conclude, ribosomes are the factories of protein synthesis of the cell or function as a micro-machine for making proteins. These are mainly composed of special proteins and nucleic acids. The Translation of messages and the linking of amino acids are at the heart of the protein production process. Mainly, ribosomes have two main functions which are to decode the message and for the form of peptide bonds.